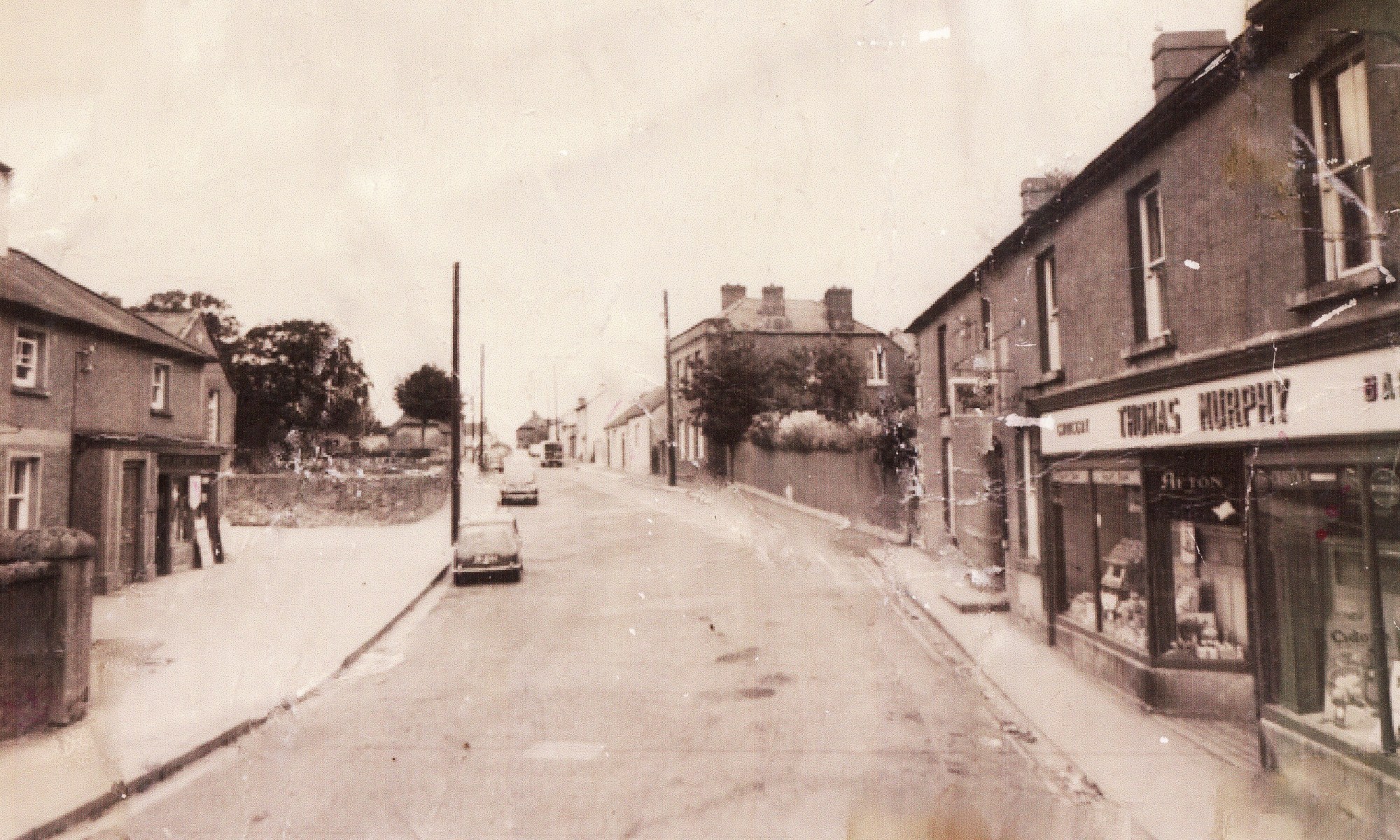 On Saturday the 2nd of July 1921 Ferns police barracks was attacked by members of the North Wexford Brigade flying Column, aided by the Ferns and Kilthomas companies. The column numbered twenty five men, while the Ferns and Kithomas companies combined totaled about fifteen. They surrounded and opened fire on the building, which was occupied by a mixed garrison of both Royal Irish Constabulary (R.I.C) and Black and Tans at the time, numbering between twenty and twenty four men total.

Nothing remains of the R.I.C barracks today. It was demolished sometime in the mid to late 20th century with the area utilized for use as the new church car park. Unfortunately a single photo of the entire building could not be found, but glimpses of the barracks exist in several others. The building functioned as a police station since at least the 1830’s, being marked on the first edition ordinance survey maps from the period. In the 1911 census buildings return it is marked as being constructed of concrete, brick or stone (most likely the latter of the three) with a slate roof and having 5 to 6 rooms. Outside a single stable and a store are also recorded. The building was rented from a Richard Donovan, whom was a prominent landowner in the area.

Due to the increase in attacks on police barracks during the war of independence many were modified for better defense. Both Joseph Kileen and James O’ Toole give good descriptions of the building prior to the attack, pointing to some of the newly added defensive features. The following is a summary description of the details provided by both; The barracks was a strongly built two storey building with a valley roof which was covered by a cage of strong netting wire. (This was done to prevent the attackers from throwing bombs onto the roof, something which had been done on attacks of other barracks in Wexford. The initial explosion would create a hole in the roof, into which grenades and other bombs could be thrown, onto the garrison inside.)

It was located a short distance back from the footpath, with a low wall in front and was surrounded by a hedged in garden on both sides and to the rear. All windows had steel shutters with loopholes, allowing those inside the barracks to aim out but making it difficult for any attacker attempting to shoot in. There was a front door with windows on either side and upstairs while each gable had a ‘single small’ window. Two windows existed at the rear of the building upstairs and there was a rear entrance also. It was noted this back door was the one used by the police, possibly because the front entrance was more open and exposed to attack i.e. from a moving car or neighboring building.

James O Toole from Clonee was in charge of the attack. A Lieutenant in the Column, he had been left in charge while the commanding officer (O.C.), Myles Breen and vice O.C. Paddy Kenny were attending a brigade council meeting. Prior to the attack the Ferns company cut telephone wires to the barracks, set up outposts on all approach roads into the village (to alert them to any enemy movement) and blocked roads . This was to have the effect of delaying or impeding the arrival of any reinforcements to the barracks. James organised his men into four sections, seven in each and positioned them to attack the barracks from the front, rear and two sides (See map with positions marked A to D.). James, together with three others, occupied the building opposite the barracks to attack it from the front (Position C: now the courtyard bar and restaurant). He placed three other men behind a ‘dead wall’ to the right of this building (Position B: now the entrance to rosemary heights between the courtyard and Garda station).

Thomas Francis Meagher, a member of the flying column, describes in his witness statement how himself and others were assigned to a section that was to attack the eastern side of the barracks from behind Haughtons Corner (Position E on map). Here they hide behind a wall 8ft high. It had been organised prior to the attack for planks to be set on barrels so the men could see over it.

There are no accounts to indicate the position of the men who attacked the rear and western gable of the barracks but by studying the available sources, combined with a site survey, likely positions can be suggested. A field boundary, possibly a ditch or field wall, is depicted to the south of the barracks on the ordinance survey map. From here (position D on map) the section would have had a clear view and line of fire on the rear of the barracks while having some cover against any responsive fire from the garrison.

The position to attack the western side of the barracks was likely from behind the schools western boundary wall (location A on map). Here the attackers had a line of sight and cover against. A position elsewhere along the street would have been too open and exposed.

It was arranged to commence the attack at 2 A.M when the church bell rang. A mine was placed to one side of the barracks and upon the sound of the bell the column opened fire. The mine failed to go off, but the attack continued. James in his witness statement states that ‘The garrison (inside the barracks) replied, but their firing was not accurate’. The darkness of the night combined with the disorientating sound of gunfire would have made it difficult to pinpoint the location of the men outside. To counteract this problem the police sent up Verey lights (Flares) continuously up the chimney, to help illuminate the darkness. Contemporary newspaper accounts of the attack state ‘The firing was very intense while it lasted and people living in the vicinity of the barracks were terrified as to the result’ (Enniscorthy Guardian, 9th of July 1921). Their are contrasting accounts as to how long the attack lasted; newspaper reports from state the firing ceased after ten minutes while James O Toole in his witness statements states they withdrew after about one hour.

Their were no casualties recorded on either side following the attack, however there was a near miss as the Enniscorthy Guardian reports how in one of the houses opposite the barracks ‘One of the bullets pierced the thatched roof of his (the owners) house and struck the wall of his bedroom.’ Little damage is reported on the barracks while some panes of glass had been broken in the houses opposite ‘as if by the firing of a hand grenade’. Thomas Meagher in his withness statement states that ‘The rank and file did not agree with the order to withdraw but, of course, we had to obey orders.’

No remains exist of the barracks today and the much of the contemporary streetscape which formed part of the attack have been removed including the ‘dead wall’ which was located at what is now the entrance to rosemary heights, as is the wall at haughtons corner, the field boundary to the south of the barracks and the western boundary wall of the school. Some extant features exist; the post office (now a Garda station), the building opposite (the courtyard) and the school house. During the survey a single bullet hole was noted in the granite sill of the most northerly window on the eastern side of the school building. This maybe a result of a shot fired, originating from inside the barracks, intended for those attacking its western gable.

Credit: Thank you to Ferns Heritage Archive Group for permission to use photographs.

Cover Photo: Image of Ferns Main Street looking up towards castle with barracks on the left and what would later be the courtyard pub and resturaunt on the right. On midnight, Saturday the 17th of April 1920 the New Ross Standard newspaper reports that people living in the vicinity of Camolin barracks were awoken to the sound of ‘…what appeared to be the noise of a crowbar playing on the cast iron entrance door of the police station.’ A number of men were seen, around the barracks, attempting to gain entry. After about thirty minutes the noise stopped and then, shortly after, the building was ablaze. A ‘…plentiful supply of petroleum oil (petrol)’ had been used in the burning. The fire left the building totally demolished with only the bare walls remaining, together with a small portion of the roof adjoining the western gable. The burning was not sporadic, but instead well planned as up to 30 men are reported to have took part. Scouts kepth guard on the village and the roads leading into Camolin. The group of men is reported to have left by two in the morning. The brigade activity reports state that the camolin company of the IRA were responsible for the burning.

The burning of Camolin barracks was only one of many that were destroyed during 1920. Others, including Camolin, had been vacated the previous year with police officers transferred to more urban barracks like Gorey as many rural stations were considered vulnerable to attack. Michael Kirwan, a member of the north Wexford IRA, states in his witness statement that general headquarters had called for the burning of all abandoned barracks in the Brigade (north Wexford) area. This tactic was to deny the authorities any opportunity to reoccupy the buidings while also sending out a message of defiance at the same time. The barracks was located on the Ferns side of Camolin where there is a slight bend in the road. This location, on the bend, ensured a vantage point in both direction towards Gorey and Ferns. It was a two story, presumably stone  built building whose construction would have offered some comfort in an attack. Sometime later it was repaired as it now serves as a private residence.

Blog Image: This is a picture of the barracks as it looks today and is a private residence. Image taken from google street view.